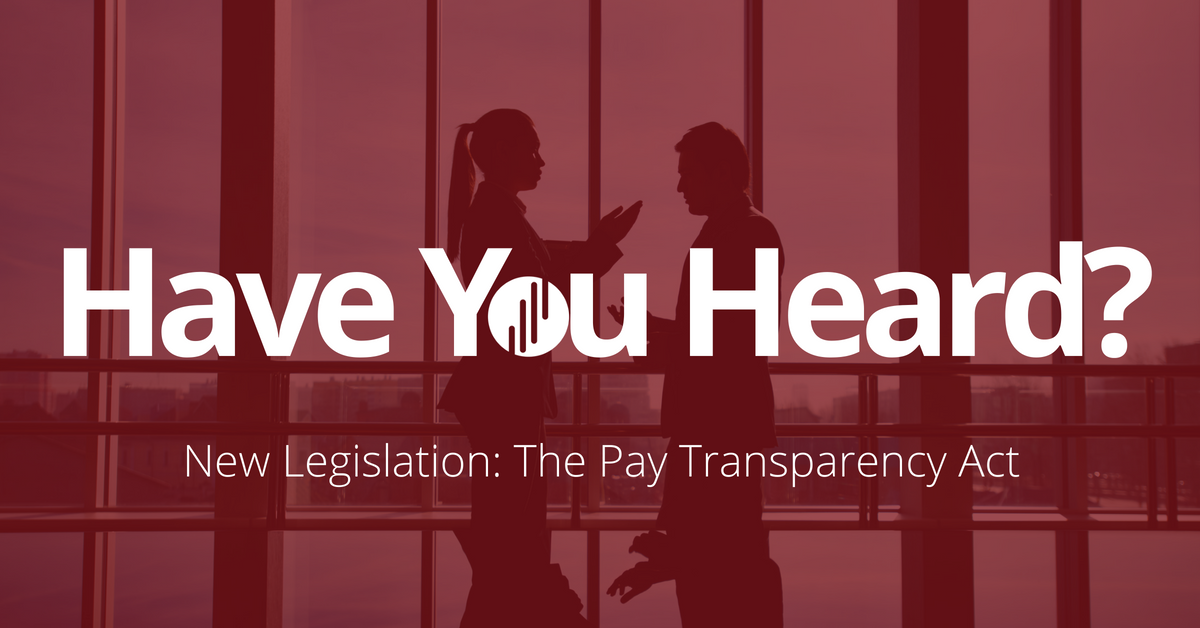 For as long as we can remember, designated groups have been disadvantaged economically by the wage gap. Women make on average 70 cents per dollar made by men – for the same work. The deficit only increases for women from different ethnic backgrounds.

This imbalance of equity has been available information for years, but little has changed. Ontario has taken Canada’s first big swing at the glass ceiling by implementing The Pay Transparency Act. As this new legislation gets underway, businesses are left wondering how their bottom lines will be impacted.

What Exactly Is It?

The Pay Transparency Act is provincial legislation intended to enhance economic empowerment and give designated groups a toolkit to advocate for themselves at work. The legislation was reportedly inspired by jurisdictions who have similar laws in place, such as Australia, UK and Germany. (From progressive fashion to progressive policies – Europe usually gets there first.)

As of January 1, 2019, Ontario will be the first province in Canada to:

Disclosure measures for pay transparency will begin with Ontario’s Public Sector. In 2020, the new legislation will apply to all employers with over 250 employees. Come 2021, the Act will extend to all companies with over 100 employees. This will cover approximately 70% of workers in Ontario and will shine a light on the majority of businesses, setting the standard for all workplaces to follow.

How Will The Pay Transparency Act Affect My Business?

The market will likely influence compensation structure more than the chosen candidate will, and companies will make most compensation-related decisions prior to hiring. The Act will prohibit businesses from hiding salaries. This could create the concern of companies losing their competitive edge in hiring by having compensation information at the forefront of market offerings.

Our Senior People Strategist Rikka Bouseh says, ”While many companies may feel that their competitive advantage is lost through the implementation of the Pay Transparency Act, the impact is actually much smaller. The reality is employees are already sharing compensation information about their employers on platforms such as Indeed and Payscale. Educated candidates are already aware of salary ranges for their roles, as are their competitors.”

Financial penalties will become a reality for companies who are unable to produce the required documentation and pass inspections. A public annual pay transparency report will showcase how employers compensate their employees, which could impact company reputation, customers, employer brand, and ultimately profitability.

Equal pay and inclusive practices are transitioning from an initiative spearheaded by HR to a tool for survival in the market. In a world that shares information fast and furiously, employers know the importance of maintaining a positive reputation.

Will This Legislation Actually Solve Problems?

From part-time jobs to fields with lower pay, there have always been systemic barriers to women getting ahead economically. The high cost of childcare forces many women to stay home and care for children instead of re-joining the workforce.

Negotiation is another big factor for the wage gap. Historically, designated groups negotiate compensation less frequently. Societal norms and gender stereotypes make it intimidating to break the mold. Although this new legislation offers tools and resources, it won’t provide the roadmap to refining negotiation styles.

Rikka shares that “while the Act does not give women, immigrants, or other designated groups additional negotiation skills; mandated salary ranges will ensure that every salary offered is fair and in line with the candidate’s skills and abilities.”

One final criticism of Ontario’s Pay Transparency Act is that the slow rollout will limit real impact. Critics feel that 100 employees or more is too large of a criteria, and propose that employers with 10 employees or more should abide by the legislation as well.

Although the Pay Transparency Act will cause additional work for Ontario employers, many consider equality to be worth it. We see businesses continuing to focus on inclusion at all levels of their business, including compensation practices. But status and monetary differences between groups will likely continue due to ongoing systemic limitations, like access to affordable child care.

Despite criticism, Ontario remains the first province taking tangible steps towards a future where a dollar means a dollar – for everyone. Who’s next?

Make sure your organization is up to date and compliant with current legislation!
Contact our team today for your free 30 minute consultation:

How to Use Social Media to Attract Top Talent

Trends that will shape the Future of Work

5 Important HR Metrics for Any Business

How to Survey Diversity, Equity & Inclusion